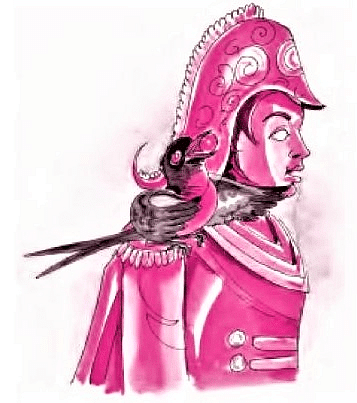 Q1. Why do the courtiers call the prince ‘the Happy Prince’? Is he really happy? What does he see all around him?
Ans: He was a prince when he was alive. Being a prince, he never knew sorrow and suffering. So, the courtiers called him ‘the happy prince’. But he was not happy in a real sense as his heart could feel the misery of needy people. He saw the miserable conditions of the people around him.

3. For whom does the prince send the sapphires and why?
Ans: The playwright was very poor. He was incapable of buying food and firewood. The prince sent the sapphires for the playwright so that he could finish a play for the director of the theatre in time. The prince sent his second sapphire to a poor match girl. Her matches had fallen into the gutter. She was afraid that her father would beat her for this loss. So, she was helped by the prince by sending her the second sapphire.

4. What does the swallow see when it was flying over the city?
Ans: The swallow saw all categories of people. He found the rich making merry in their beautiful houses and beggars begging and sitting at the gates. He also saw a group of wandering children who were poverty-stricken.

5. Why did the swallow not leave the prince and go to Egypt?
Ans: At first, the swallow was willing to go to Egypt just after discharging his duty properly. But when he saw the Prince’s activities of charity and kindness he got impressed. On the other hand, now, the Happy Prince had become totally blind due to the deeds of charity. In this condition, he could not leave the Prince helpless. He left the idea of going to Egypt and decided to serve the Prince.

Q2. The little swallow says, “it is curious, but I feel quite warm now, although it is so cold.” Have you ever had such a feeling? Share your experience with your friends.
Ans: Man is a social animal. He is social because he is dependent on others to lead a satisfactory life. In this regard, mutual help is required. Whenever we help others, there is a feeling of satisfaction. Whenever we are helped by others, we feel grateful. It is because helping others is the essence of life.

In this chapter, the little swallow feels warmth when he helps needy people. He does his act of selfless service with utmost dedication and sacrifice. Owing to this selfless service he becomes satisfied. Yes, I have experienced such a feeling many a time. I believe in helping others. Others to help me whenever I am in need. I help others considering it my duty. I remember the day when I started helping others. Since that day I feel more confident and have become a successful citizen. I feel the presence of God around me.

1: Why did the Swallow cry when the Happy Prince asked him to pluck out one of the sapphires?

Ans: The swallow cried when the Prince asked him to pluck out one of the sapphires because the Prince would go blind. The Prince suffered too much to help the poor and needy people.

2: Where was the swallow going? Why did he decide not to go there?
Ans: The little swallow was going to Egypt to join his friends. The Happy Prince looked so sad that the swallow decided to stay back and be his messenger. The swallow died helping the happy Prince in the service of poor people.

3: What were the drops of the rain actually? Why did they fall?

Ans: The drops of rain were actually the Happy Prince’s tears. The Happy prince was sad and moved by the widespread poverty and misery. He had always seen happiness around him. He could not fathom that people were sick and crying because of the pain around them.

4: Describe the statue of the Happy Prince as described at the beginning of the story?

Ans: At the beginning of the story the statue was fixed on a tall column, full of thin leaves of gold on the
body, and had two sapphires for eyes. It had a large red ruby fixed on the hilt of the sword.

6: In the story “The Happy Prince” what are the two most precious things? What makes them so precious?
Ans: The two most precious things were the leaden heart of the Happy Prince and the dead swallow. The former wept for the poor and helped them by giving sapphires, gold leaves, and rubies. While the latter helped the prince in his noble cause and sacrificed her life while staying with him.

9: What were the drops of the rain actually? Why did they fall?
Ans: The drops of rain were actually tears of the Happy Prince because he was weeping on seeing the misery and suffering of the people.

10: Why was the “Happy Prince” not really happy?
Ans: When the ‘Happy Prince’ was alive, he did not know what tears and sorrow were. After his death, he could see the ugliness and misery of the city. Therefore, he weeps and is not really happy.

11: Why did the swallow not leave the prince and go to Egypt?
Ans: The Happy Prince looked so sad that the little swallow felt sorry for him. He agreed to stay with him for one night and be his messenger. He picked out the great ruby from the prince’s sword and flew away to deliver it to the poor woman.