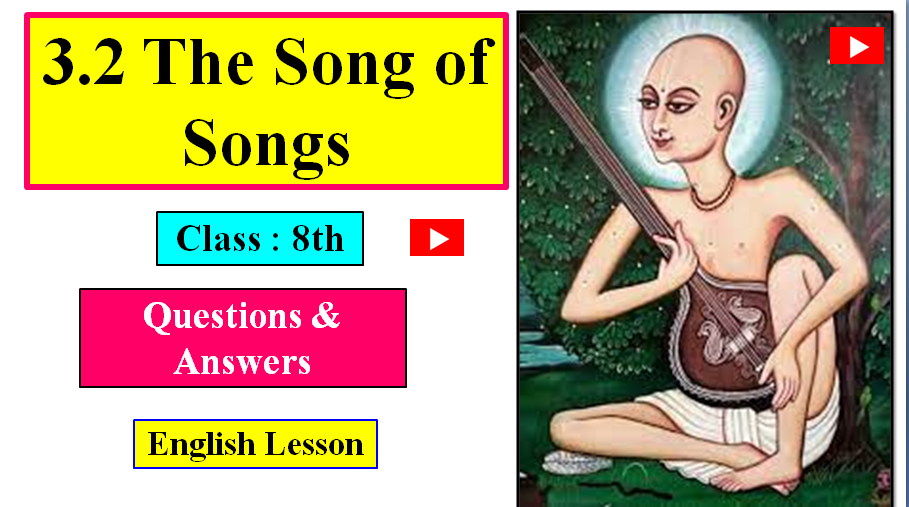 (1) Discuss with your friends and write down the names of 5 to 6 Indian musical instruments and those used in Western music.

(2) A ‘Raag’ or ‘Raga’ is a music piece in Indian Classical music which is sung or played in a fixed combination of 5 to 6 basic musical notes.

From any singer/musician or the Internet write down the names of any five Ragas and on what occasion they are best sung.

(1) Frame your own sentences by using words/phrases.

(a) Wonderful – I saw a wonderful dance performance yesterday.

(b) Superb – Sachin Tendulkar is a superb batsman.

(c) Very well – This time, I did very well in Maths test.

(2) From the story make a list of words related with ‘music’.

(a) musician (b) tanpura

(4) Match the sentences with their types.

(5) Make as many words as you can from the word: ‘EXASPERATED’

(a) Emperor Akbar greatly admired Tansen’s music, but now he was bored with it.

(b) Akbar was arrogant and expected all his subjects to obey his commands.

Ans: Can Not say

(d) In spite of being a great singer, Tansen continued to make deliberate mistakes.

(e) Any effort dedicated to God turns to be the best.

(a) would lift happen if’ the Emperor would summon Sant Haridas:

Ans. Sant Haridas would not obey Akbar. Perhaps, Akbar would be surprised and angry.

(b) What if you find n blind person singing songs melodiously for begging:

Ans. I would give him some money and try to find someone to sponsor him for a music class.

(8) Say whether the underlined are Phrases or clauses.

(a) The musician laid his tanpura on the carpet.

(b) There is someone, who sings far better.

(c) He had been Tansen’s music teacher and he lived the life of a hermit.

(d) The music spread like the first glimmer of dawn.

(e) His music springs from the depth of his soul.

(f) As they walked back, the emperor suddenly broke the silence.

(9) Divide the class into 2 groups. (Teacher divides the story into 2 parts.) Each group should be allotted one part to be converted to a play/skit format. Combine the two parts, such that the entire story is converted to a play. Also give a suitable title. Present the play in your class.

Ans: To be done by student

(10) Search on Internet the information about Tansen and any two great artists / musicians with the help of the following points.

Collect any five stories of Akbar and Birbal. Write / present any one of them in the class.

Ans. [To be done by student]

Ans. Tansen is the musician.

(2) How does Emperor Akbar praise Tansen?

Ans. Emperor Akbar praises Tansen by stating that he had the most wonderful voice in the world.

(3) Who was the musician that Tansen was talking about?

Ans. Tansen was talking about his own guru, Sant Haridas.

(4) How was Akbar different from other rulers of that time?

Ans. Akbar had genuine appreciation about Art. He did not have an ego as an Emperor. He respected artists and treated them with modesty and humility. Other rulers of his time would have been enraged with an artist who refused come at his bidding. but Akbar himself went to meet the great musician.

(5) Why did Tansen make deliberate mistake?

(6) What is the music that spread across the forest compared to?

Ans. The music that spread across the forest is compared to the first glimmer of dawn or the fragrance of jasmine.

(7) What reason did Tansen give for his Guruji’s outstanding music?

Ans. Tansen explained that while he sang at the Emperor’s command, his Guruji sang for his own free will. He sang for the master of kings, that is God. Hence, his music was divine.

(a) “I think you have the most wonderful voice in the world!”.

(d) The reply would have enraged any other emperor.

(a) really cried the disbelieving Akbar

Ans. “What ! Not even ifhe hears that the emperor has summoned him?”

(6) Spot the error in the following sentences and rewrite the correct sentences.

(a) I think you has the most beautiful voice in the world.

Ans. I think you have the most beautiful voice in the world.

(b) His music spring from the depth of his soul.

Ans. His music springs from the depth of his soul.

(7) Write the related words as shown in the example.

(B) Do as directed

(1) Make a meaningful sentence of your own using the given phrases.

Ans. The principal summoned the naughty boy in his office.

(b) to spread across

Ans. The news of his brave deed spread across the world rapidly.

(2) Add a prefix or suffix to the following words to make new word and use any one of the root words in your own sentence.

Ans. He has a strong belief in truth.

Ans. Everyone was shocked by the sudden earthquake.

Ans. Beauty lies in the eyes of the beholder.

(3) Add a clause to the following sentence to expand it meaningfully.

(a) Exasperated, Sant Haridas took the tanpura from Tansen’s hands.

Ans. Sant Haridas, who was exasperated, took the Tanpura from Tansen’s hands.

(b) Even his favourite pupil could not persuade him to change his mind.

Ans: Even the pupil, who was his favourite, could not persuade him to change his mind.

Extract 1 – Read the following passage and do the activities.

(a) Sant Haridas said he wouldn’t sing because

(ii) He was long past the age of singing.

(iii) He had recognized the emperor.

Ans. (ii) He was long past the age of singing.

(b) Tansen deliberately made mistakes in singing because-

(i) He was unwilling to sing.

(ii) He respected the teacher.

(iii) He knew that the teacher would sing in the right note to correct him.

Ans. (iii) He knew that the teacher would sing the right note to correct him.

(a) An humble lover of music.

(b) He lived an austere life of a hermit.

(c) He made deliberate mistakes while singing.

(d) He was exasperated and sang in the right note.

(e) He was the favourite pupil of Sant Haridas.

(f) He knew how to get around his guru to sing.

(h) He was busy with his daily chores.

Write down any 5 facts about Sant Haridas.

(a) He was a great musician.

(b) He was Tansen’s teacher.

(c) He was old and past the age of singing.

(d) He lived a simple life of a hermit.

(e) He could not tolerate wrong notes while singing.

A3. Vocabulary Based Questions:

(1) Which words in the passage mean the following.

2. List three words from the passage which are Indian.

(3) Find from the passage words related to music.

(4) Find from the passage the nearest synonyms of the following.

(1) “That’s not the right note Tansen, cried his teacher amazed.

(Rewrite the sentence in Indirect speech)

Ans. The teacher pointed out to Tangen in a surprised tone saying that was not the right note.

(2) What part of speech are the underlined words?

(a) He was busy with his daily chores.

(b) Tansen knew how to get round him

(3) Fill in the blanks with appropriate adjectives from the passage.

Tansen knew how to get his teacher round to sing. What trick will you us to get your father round to give you permission to go for a movie with you friends?

Ans. I will irritate everyone in the house, sin loudly, put on the TV in high volume an express utter boredom. Then my father will ask me why I don’t go out to play with my friends. I will tell him innocently that they are all going out to watch a movie. I am sure my father will come round, give me money and permit me to join my friends.

Extract 2 – Read the following passage and do the activities.

The music is compared to

(2) Mention 3 ways in which the music affected the emperor.

(a) He was hypnotised by the music.

(b) He had not known that music could be like this.

(c) He had certainly never heard anything like it before.

Ans. The Emperor said to Tansen.

b. “How can I expect my music to be so beautiful and divine?”

4. The Emperor realized that Tansen had spoken the truth. What was the truth

(a) Tansen’s voice was best in the world.

(b) Tansen sang for God.

What was the difference between Tansen and his guru?

Ans: The guru sung out of inspiration. He sang of his own free will. Tansen sung for the emperor. He sang at the emperor’s command. Guru’s music is unasked for. He could be ordered to sing. He sung for God. the master of Kings. Hence. his music was beautiful and divine.

A3. Vocabulary Based Questions

(2) List from the passage words / phrases that describe the music.

(f) It springs from the depths of his soul.

(g) It is free and unasked for.

(4) Find the antonyms of the following that are used in the passage.

(1) Tansen had spoken the truth.

(Choose the correct question that answers the underline word)

(a) Who had spoken the truth?

(b) What had Tansen spoken?

(c) Why did Tansen speak?

Ans. (b) What had Tansen spoken?

(2) Guruji sings for the Master of even kings.

(Add a clause and expand the sentence)

Ans. Guruji sings for one who is Master of even kings.

(3) How can I expect my music to be so beautiful and divine?

Ans. I cannot expect my music to be so beautiful and divine.

(4) “Shahenshah, I sing at your command the command of the Emperor of Hindustan.”

(Rewrite the sentence in Indirect Speech)

Ans. Tansen brought to the notice of Shahenshah that sang at his command, the command of the Emperor of Hindustan.

(1) Translate the following sentences into your medium of instruction.

(a) As they walked back, the emperor suddenly broke the silence.

(b) This reply would have enraged any other emperor.

(c) I shall go as a humble lover of music. Ans.

(d) Tansen did not seem to understand his teacher and he made the same mistake again.

(2) Translate the following sentences into English.

Ans: How can I expect my music to be so beautiful and divine?

Ans. And he made a deliberate mistake.

Ans. This reply would have enraged any other emperor.

Ans. Sant Haridas was the man, Tansen had spoken of.

(3) Translate the following words into your medium of instruction.