2.4 An Epitome of Courage

*A Strange Truth – ‘Handicapped are those who refuse to take up challenges, even with all their senses and physiology in perfect condition.’ Understand and discuss the above truth.

Examples of inspiring people who are inspite of their handicapped condition.

Wilma Rudolph – Won running race though she had scarlet fever.

Michael Faraday – become a successful scientist even though he was suffering from speech defect.

David Hartman – became a successful doctor inspite of his blindness.

How can you encourage such people to change and become confident? Discuss at least 4 to 5 ways you can do the above.

*Create awareness among them about their natural talents and skills.

*Tell them inspiring and motivating stories of handicapped people.

*Tell them some skills and techniques to overcome their problems.

*Inform them about medical treatment according to their defects.

1. There are pleasant and polite ways of referring to people with physical and mental disabilities. Fill in the table below:

2. Read the beginning and complete the story in your own words:

Sumit, the son of a shoe maker was a highly intelligent student in municipal school. His maths teacher called him ‘Einstein’, for he was brilliant in maths. He loved maths. Sumit wanted to study further S.S.C. However, he suffered from polio and it was an end of his education. It was a bolt from the blue for him. There was no way before him accepting this quirk of fate. Sumit had already registered his application for S.S.C. examination. He was worried about facing S.S.C. examination. But the principal’s timely help changed the life of Sumit. Sumit was allowed to keep a writer for him during examination. It was a hope of ray for him. He completed his examination with confidence. When the results were declared, Sunlit was the first rank holder in his district. Sumit’s joy knew no bounds.

The school trust and staff helped him to get best medical treatment. He was admitted in a well-known hospital. He was there for a month. He got the best treatment. He was cured about fifty percent. He hoped to continue his higher education. He joined the prestigious college. He passed his H.S.C. examination with excellent marks. Then he joined Degree college. He selected Mathematics as a principle subject. Then he completed post-graduation in Mathematics at the prestigious university. He achieved university gold medal in Mathematics. Then he completed his Ph.D. He became a well-known mathematician. In this way, Sumit overcame his physical disability and completed his dream. So, we should complete our dream by working hard.

1) What did Stephen Hawking’s parents fail to know about him?

Ans: Stephen Hawking’s parents failed to know that one day their little boy (Stephen Hawking) would be hailed as one of the greatest scientists of this century.

Ans: Courage is a wonderful thing. It is that quality which makes people not lose heart when faced with a great calamity.

3) Where was Stephen Hawking sent for studying mathematics?

Ans: Stephen Hawking was sent to the university of Oxford to study mathematics.

4) What happened when he was seventeen?

Ans: When Stephen was seventeen, he started noticing that he was becoming increasingly clumsy and even fell down a couple of times.

5) What did his family doctor diagnose?

Ans: His family doctor diagnosed that Stephen was suffering from an extremely rare disease – ALS or LOU Gehrig’s disease.

Ans: He studied about the concept of Black Holes to get his Ph.D.

7) Inspite of no control on his body, how did Hawking express his ideas?

Ans: Inspite of no control on his body. Hawking expressed his ideas with the help of finger and computer.

8) What does the writer say about the books authored by Dr. Hawking?

Ans: The author says that Stephen Hawking’s writing is full of wit and humour. His style is so lucid that non-scientists can also understand him. His book “A Brief History of time” is one of the bestselling books of our times. 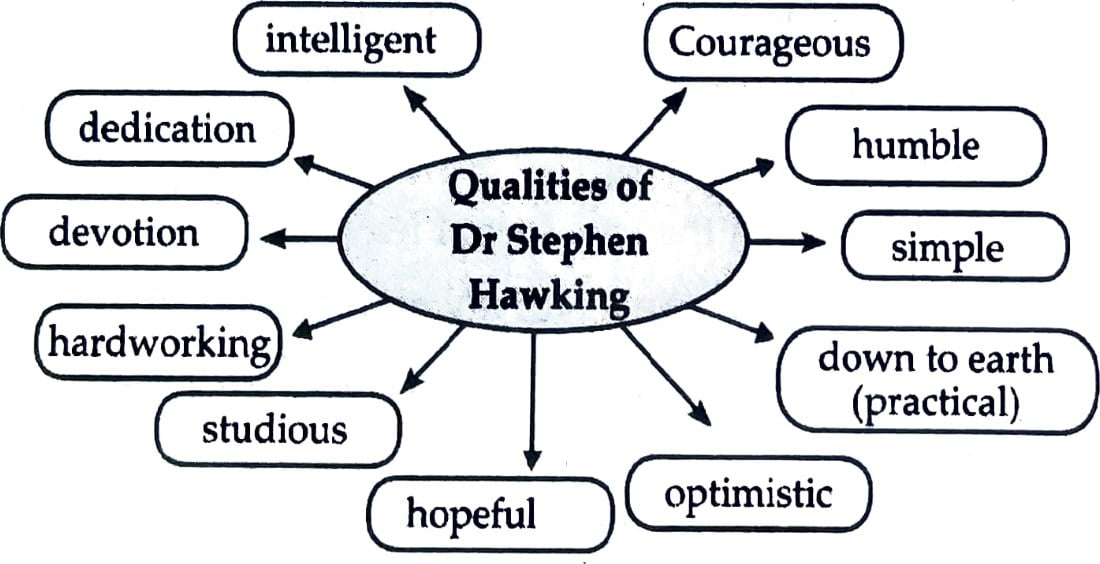 3. Arrange the following statements according to the occurrence in the life history of Dr Stephen Hawking.

1) Stephen was born on 8th January, 1942 and then grew up like an average child and a normal teenager.

2) At the age of 17, Stephen noticed that he fell down a couple of times for no reason.

3) Stephen was diagnosed with a rare disease – ALS or LOU.

5) The disease worked its way into Stephen’s body and left him disabled.

6) Though confined to a wheelchair he worked on computer and expressed his thoughts.

7) He became a fellow of the Royal Society and a member of the US National Academy of Science.

8) He believes that in the next millennium, science will discover the core secrets of the universe.

4. Homographs – Pairs of words that are spelled and pronounced the same, but have different meanings, in different contexts.

Use the following words in two different contexts.

(i) I found a couple walking in the garden. (wife and husband)

(ii) I found a couple of friends playing on the ground. (two, pair)

(i) Mind is an invisible organ. (organ)

(i) The rocket launched into the space. (Unlimited region above the earth)

(ii) Every colony has an open space. (area, place)

(i) Srushti dislikes the sound of drum. (noise)

(i) Madhuri left the city. (act of leaving something)

(ii) Vajida lives in the left of my house. (side, direction)

5. Use the following words/phrases in your own sentences.

(b) confined to: He was confined to bed during his last period of life.

(e) millennium: India will be really a super power in a coming millennium.

6. Expand the given themes:

(a) If you fall ill during your final exam.

(b) If you meet a disabled person who needs help.

Ans: If I meet a disabled person. I will greet him with polite words. I will behave friendly with him. I will enquire about him. I will understand his problem) I will decide what type of help he needs. I provide him the help according to his requirement I will help him to reach at the proper place. If I requires medical aid, I will take him to the doctor I will give him proper treatment and medicine to sum up, I will be friendly and frankly with the disabled person.

(c) If your friend is in trouble.

Ans: If my friend is in trouble, at first, I will be sorrowful about his troublesome situation. I will behave like ‘A friend in need is a friend indeed.’ I will rush my friend I will understand his problem. I will think about the possible solutions on his problem. will help him personally to get him out. However, will get help of other friends. I and my other friend will find out the decisive solution on his trouble. will make my honest efforts to save my friend for trouble.

(d) If you meet a great person like Dr Stephen Hawking

Ans: If I meet a great person like Dr. Stephen Hawking, it will be a matter of pride and honour for me. consider myself lucky to speak a couple of words to such great person. At first, I will welcome a great person in my house. I will congratulate him for his brilliant performance. I will show my honour and respect to him by presenting shawl and coconut Then I will give him snacks and tea. Later, I will discuss with him a great struggle in his life. I will understand many ups and downs in his life• will learn about the challenges and hardships in his life. I will know people supporting him in his mission. I will understand the secret of his success in his career. However, I will understand about his future plans. Finally, 1 will say him good bye.

7. You happen to meet a successful person who is a disabled. write an imaginary dialogue between you and him/her. You can take support of die hints provided.

I: Welcome to our school.

Sudha: O.K. Thank you very much.

I: Congratulations for your brilliant success in spite of your disability.

Sudha: Thanks a lot.

I: I want to know about physical disability. What is the cause of your disability?

Sudha: My Physical disability is not natural. It is not from my birth. It took place because of accident. I was with my family for our family trip. The accident took place. I had to lose my right leg.

Sudha: I was admitted in a local hospital. The doctors advised to cut my right leg from knees.

I: It was really sad. How did you manage later?

I: Really your journey is inspiring. I would like to know the idols in your life.

Sudha: I have many inspiring examples before me. I got an inspiration from Dr. Stephen Hawking, Dr. David Harman and Wilma Rudolph. They are idols in my life,

I: I would like to know the support of your family members and friends in your success. How did they support you?

Sudha: I am lucky to get support and cooperation of all my family members and friends. They give me unconditional support in my every activity.

I: What is your accomplishment?

Sudha: I am a successful dancer still I have many dance programmes in India and abroad.

I: What is the secret of your success?

I: What message will you give to the disabled persons?

Sudha: I would like to tell them that disability is not a weak point. They should overcome their disability.

I: Thanks for your valuable time. Have a bright future.

(a) Complete the following Word Chain of adjectives.

(b) Complete the following word chain of nouns.

2. (A) Convert the following to Exclamatory sentences of the same meaning.

(a) Dr. Hawking is a very humble man.

Ans: What a humble man Dr. Hawking is!

Ans: How clumsy he was!

(c) He was very simple and intelligent.

Ans: How simple and intelligent he was!

Ans: What a wonderful thing courage is!

(B) Convert the following to Interrogative (Question) form.

Ans: Was the prognosis bad?

(2) Stephen decided to continue his research.

Ans: Did Stephen decide to continue his research?

(3) There are many people who display exemplary courage.

Ans: Are there many people who display exemplary courage?

(4) His mind would soar up into space, like light.

Ans: Would his mind soar up into space like light?