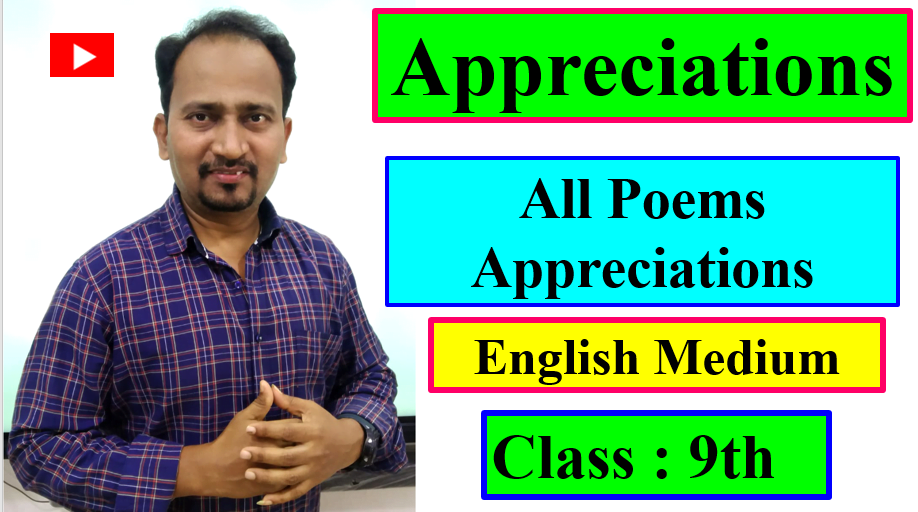 3. Theme/Central idea: The poem encourages us to look at life with a positive attitude. It tells us to be optimistic and have the courage to persevere and we will overcome our difficulties and be victorious.

4. Rhyme Scheme: abcb in the first stanza, dede and so on in all the remaining stanzas.

5. Figure of Speech: ‘What though death at times steps in’. The figure of speech is Personification.

6. Special Feature: This is a motivational and encouraging poem. The poet says that all our worries and grief is transient and which will be soon turn into pleasant and sunny moments.

1.Title: The tittle of the poem is “Have you ever seen”

2. Poet: Poem is written by an unknown poet.

The figures of speech used are Interrogation such as ” Can the garden plot be deep and dark?”

in this, Question is not asked to get an answer but to make us think.

The special features of the poem is that it is full of fun and pun and it makes imagination Run wild!! ]

1. Title: Title of the poem “Invictus”

2. Poet: This poem is written by William Ernest Henley

3. Central Idea: The poem was written during the time when the poet lost one of his leg. It rendered him strength and hope to overcome his agony and impairment. It reminds the readers of how one can change the direction of his/her with right perception and will.

2. Poet: This poem is written by Mary Dow Brine.

“And so without hurt or harm he guided the trembling feet along”.

Hence, the poem is written very simply and reminds us of saying “Do unto others what you would have then do unto you”.

Translated by Prof. A. W. Ryder

3. Theme/Central idea: The main theme of this poem is the poets beautiful description of the advent of Autumn season. The poet has compared the season of autumn to a graceful maiden who has beautified herself in many ways.

5. Figure of Speech: Alliteration: ‘She seems a slender maid, who soon …’. Repetition of the sound of the letter ‘s’.

6. Special Feature: The special feature of the poem is the imagination of the poet and beautiful imagery. He has described Autumn in a very beautiful manner and compared it to a woman.

7. Favourite lines: And on her face (the radiant moon)

She seems a slender maid, who soon

Will be a woman grown.

• Theme/Central idea: The poet describes the magical (-fleets of the silvery moonlight on the countryside at night.

• Why I like/don’t like the poem: I like the poem because of the serene scene it portrays. The imagery is beautiful with words like ‘silver’ and ‘silvery’ mentioned in the second line of every couplet.

1. Title: Title of the poem is “The Road Not Taken”

2. Poet: This poem is written by Robert Frost.

3. Rhyme Scheme: Rhyme scheme of the poem is ‘abaab’.

3. Central Idea: This short, simple, poem conveys a very important message to the readers. The poet’s experience becomes symbolic of human experience in all ages. Once, travelling alone in the woods, the poet stood at a point where two roads diverged. He felt confused in selecting the path.

1. Title: Title of the poem is ’Please Listen!’

2. Poet: This poem is written by an unknown poet [Anonymous].

3. Rhyme Scheme: there is no rhyme scheme.

4. Figures of Speech: Important figure of speech is Repetition: ‘When I ask you to listen to me.’

This line has been repeated in the poem for emphasis.

5. The Central idea of the poem: Through the poem, the poet implies that we too should work things out ourselves when we are faced with difficulties or have some irrational feelings [i.e. illogical feelings]. The poet is confident that he will find out the reasons behind his illogical feelings and then he will be able to solve his problems by himself. He feels that prayers probably work because God just listens to us silently when we pray and then lets us work things out ourselves.

RHYMING SCHEME- The rhyming scheme in this poem is AA, BB, CC, DD…

Here, Court and Fort are similar sounding words so they are given A, A.

FAVOURITE LINE- Ah no, to thee I sing; he sings to God. (write on your own opinion)

(This is my favourite line as the climax was hidden here at the last at it was the last line of the poem) What’s yours?

THEME- This poem is a kind of story describes the appreciation that Akbar gave to Tansen for his singing. Then he meets Tansen’s teacher and the end of the poem, the climax reveals as Tansen says, I sing for people and my teacher sings for God, which shows the bonding of a student (disciple) with his teacher (guru).

There are a lot of other figures of speech in the poem but here we will take one only by considering the last line (mentioned above).

In the last line we have 2 same words, sing and sings. So, it’s repetition.